“Faking It” at the Met 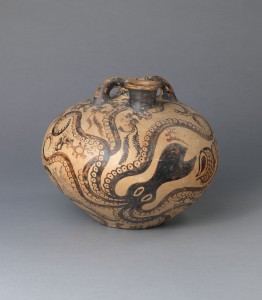 The art of the Greek Bronze Age is an intoxicating blend of reality and fantasy: colorful depictions of wide-eyed octopuses, craggy landscapes, well-endowed goddesses, mythological beasts, and millennia-old rituals abound on amulets, frescoes, jewelry, seals, vases, votive statuettes, and weapons. It’s hard to imagine a time before these exhilarating works—products of the great Minoan and Mycenaean civilizations but influenced by cultures spanning from the Middle East to India—were known to the modern world. But as recently as the late 19th and early 20th centuries, these treasures were still ensconced deep in the earth, awaiting discovery.

Historic Images of the Greek Bronze Age: The Reproductions of E. Gilliéron & Son, a yearlong exhibition at the Metropolitan Museum of Art, transports visitors back to the days when archaeologists first started buzzing about the existence of a “preclassical” Greece. On display are 60 detailed reproductions, fashioned to scale, of some of the most famous artifacts to be unearthed from sites such as Knossos, Mallia, Mycenae, and Tiryns. Created a century ago, these objects are now practially “artifacts” in their own right—records of early archaeological and museological practice. They are the handiwork of a Swiss father-son team who shared the same name, Emile Gilliéron (differentiated in the Met’s show as père [father, 1850–1924] and fils [son, 1885–1939]), and had a surprisingly profound influence on how these works were perceived by worldwide audiences. 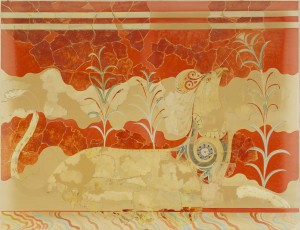 The duo worked closely with prominent archaeologists such as Sir Arthur Evans, the father of Minoan archaeology, to resurrect these fragmentary images as they emerged from the ground. The Gilliérons then made high-end, precise copies of the artifacts for sale to museums around the world, including the Met. In the days before cheap travel and social media, such collections of “genuine fakes” were invaluable resources to students, scholars, and the general public alike.

Key to the success of identifying and commissioning such newly unearthed artifacts was Gisela Richter, curator in charge of the museum’s Department of Greek and Roman Art from 1925 to 1948. Each year, the widely published scholar spent three months in Greece. “She’d hear about a discovery and request a replica of it for the museum,” says the show’s curator Seán Hemingway. “What’s interesting is that archaeologists would give their permission to have the copies made.” Evans, for example, gave his permission with the understanding that the objects wouldn’t be published before he published them, but that they could be displayed so people could see what was being found.

A black-and-white photograph in the exhibition shows how the Met’s “Gallery for Prehistoric Greek Art” looked in 1933. “Most of the objects in this picture were reproductions,” says Hemingway, who points out that the copies were clearly labeled as such. One wood-and-glass display case in the photo, which holds a replica of the Agia Triadha sarcophagus, was actually dusted off and reused for the same purpose in the present show. “We even used to have the Lion Gate from Mycenae,” he adds. “It’s just amazing.” In subsequent years, the Met started acquiring real Bronze Age artifacts, so many of its reproductions were sold, given away, and lent out to fellow institutions. Even so, the museum still has hundreds of others squirreled away in storage. 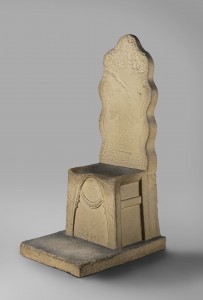 The only object in the show not produced by the Gilliérons is the so-called “Throne of Minos” from the palace at Knossos (right). The plaster copy is so close to the alabaster original, I can’t help but linger for a moment. “The throne’s great, isn’t it?” says Hemingway. “When I first saw it, I thought, well, it’s just dirty because it’s been in storage for a long time.” But after inspection by a conservator at the museum, he learned it was intentionally muddied with black paint to look exactly as it did when it was excavated. Most of the palace was badly burned in the 14th century B.C., he explains, and the throne (both the original and its doppelgänger) reflects this pivotal moment of the site’s history. The throne was one of the first objects found during the first season of excavations at Knossos in 1900; the Met snatched up the work directly from Sir Arthur Evans in 1906. “That’s part of the interesting thing about this exhibit,” he adds, “most of these works were made very soon after they were found or restored.”

Although aspects of some of the Gilliérons’ works, like the border of the Bull Leaper’s fresco from Knossos (top banner; border not pictured), have since been tweaked with the help of additional discoveries—and scholars have scrutinized and debated the details of countless others—it’s amazing how these images have endured. In fact, the fresco copies that still hang on the walls of the actual palace at Knossos on Crete, giving visitors a lasting impression of the whimsical art roughly in situ, were more than likely made by the two as well. 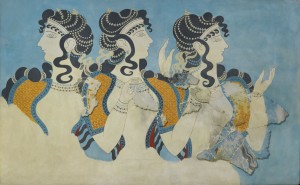 Even overly embellished reproductions, such as the Ladies in Blue fresco (left) retain historical value. This work was created the year after an earthquake damaged the original, which was on display at the Iraklion Archaeological Museum. “Gilliéron, the son, went to Crete in ’27 to repair the original, then he made a copy for us,” says Hemingway. “This piece is so much of their restoration. That’s why it’s kind of a signature piece for this exhibition.”

So why—since these works are now so well known—should these “fakes” entice visitors to the Met today? “They convey quite a close sense, in terms of scale and color, of the remarkable wall paintings that were done on Crete and elsewhere in Greece in the Late Bronze Age that our collection doesn’t. They add to our ability to convey the complexity and richness of the art of the period,” says Hemingway. “This exhibition has been kind of fun because it’s gotten into how these two men worked with Evans—and that’s really the focus of the exhibition: their work on Crete and how they made this sideline business of making reproductions. And we were such a great client of theirs.”

See a related article by Seán Hemingway on the Met’s website.

“Historic Images of the Greek Bronze Age: The Reproductions of E. Gilliéron & Son” is on view at the Metropolitan Museum of Art through June 17, 2012.