We Really “Are” What We Eat 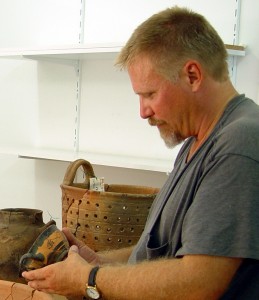 Today’s Mediterranean Diet is renowned for its delectable fish and vegetable dishes drenched in olive oil—and it is best enjoyed in good company over a carafe of wine. But how different was it in ancient times? Research undertaken by archaeologist Donald C. Haggis of the University of North Carolina at Chapel Hill is starting to provide some mouthwatering answers. “What people ate and how people ate were directly connected to their society,” he says.

Since 2002, Haggis has been directing excavations at the Early Iron Age and Archaic (ca. 1200–480 B.C.) site of Azoria on the Greek island of Crete. Here he has conducted the most comprehensive analysis of diet at an early Greek city in the Aegean to date. “While food has been recovered from cemetery and sanctuary sites in Greece, we still have significant gaps in our information about domestic and civic spaces, houses, and public buildings,” he says. “We know from historical sources that food was an important aspect of economy and sociopolitical interaction.” Archaic and Classical Cretan political institutions required food as forms of payments or tithes, he explains. They also stored and processed food for public banquets and consumed food in the context of public assemblies and sacrifices to the gods. 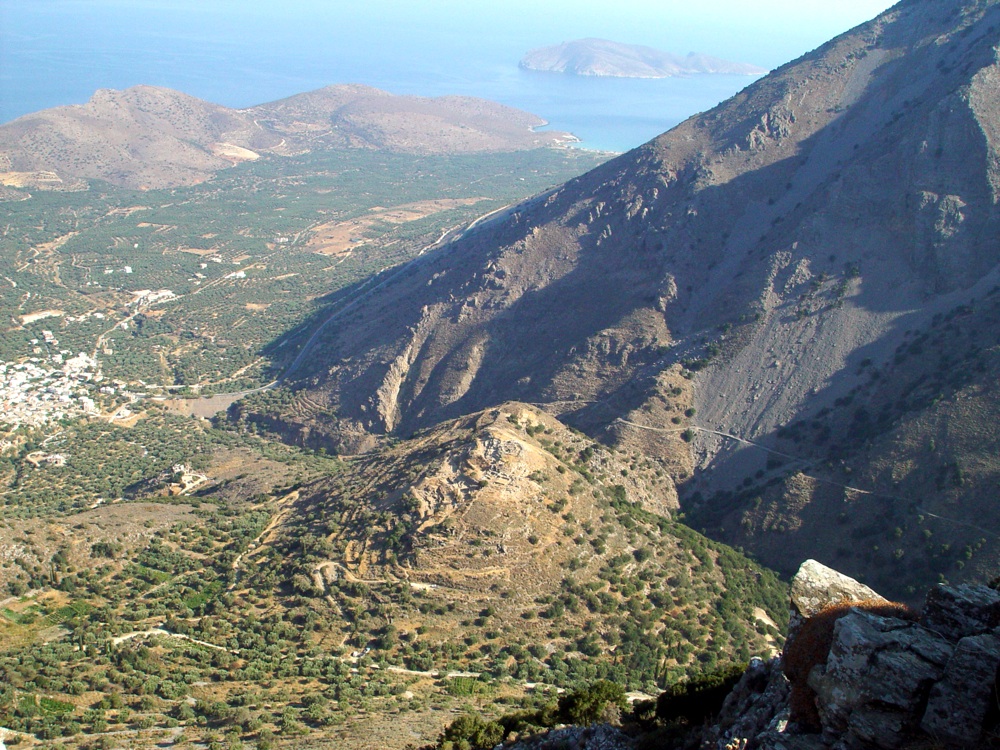 Azoria, Crete (on the hilltop in the foreground)

So Haggis decided early on to expose as much of the site as he could. While many archaeologists try to avoid such large-scale digging these days, he argued that it would be necessary in order to obtain the teeny remnants of faunal and botanical data he was looking for—“clues” to the city’s economic and social structure. This required intensive strategies; in fact, the most intensive sampling done on a Classical site to date. On average, over the course of each six-week season between 2002 and 2006, the team dry-screened 50,000 liters of soil and water-sieved 700 to 800 samples (or 13–15,000 liters)! 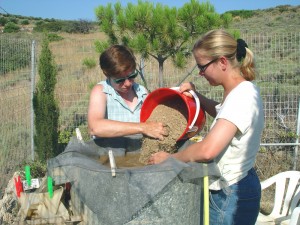 Melding into the earth over the past three millennia were the bones of fish and animals such as cows, goats, pigs, rabbits, and sheep; remnants of almonds, barley, cheeses, figs, marine life, olives, onions, pistachios, pulses, seashells, and wheat; and, in the sediment at the bottom of large pithoi (storage jars), grapes and their stems—evidence of wine. The team also unearthed heaps of pottery: serving dishes and entire cooking-pot assemblages, as well as kraters for mixing wine; amphoras for storing, transporting, and dispensing wine; and drinking cups and jugs. But as remarkable as these finds may seem, says Haggis, “Nothing actually surprised us about the range of foods consumed, only the ways in which foods were processed and consumed.” 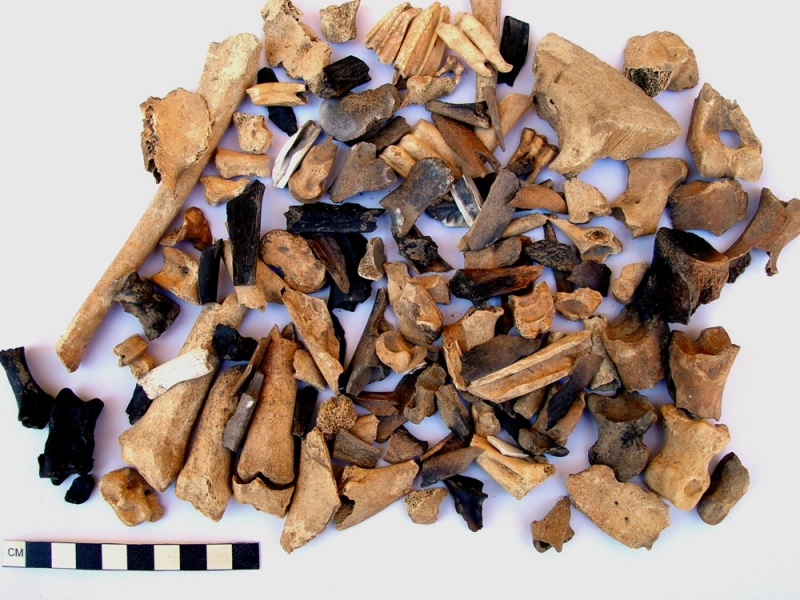 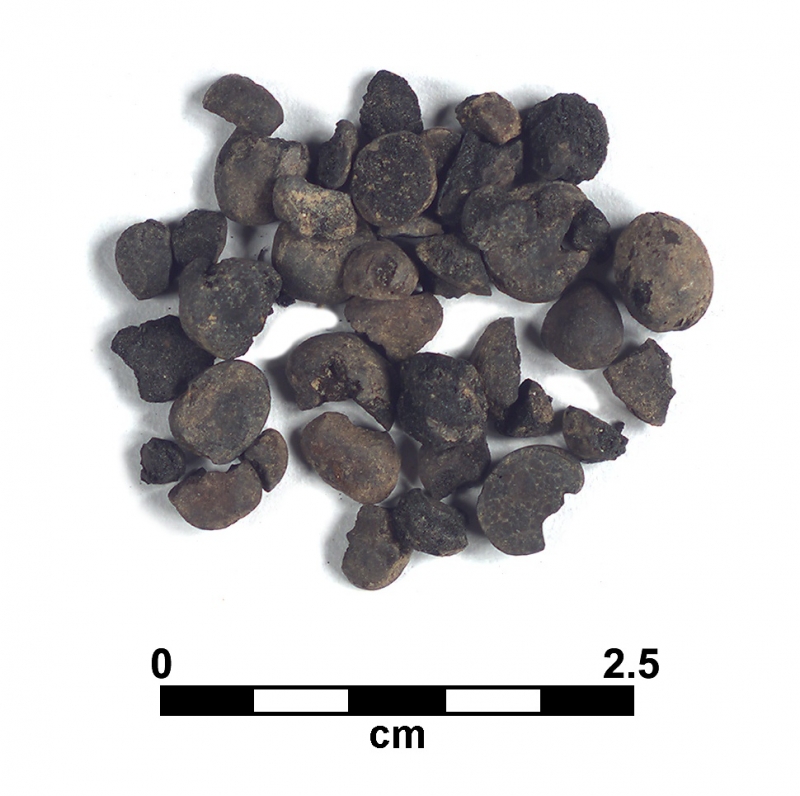 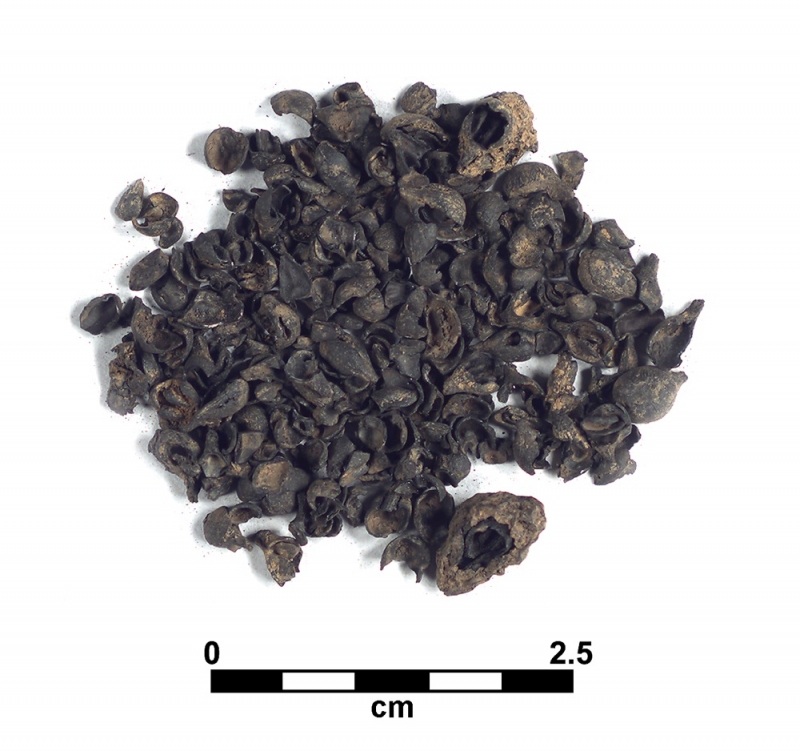 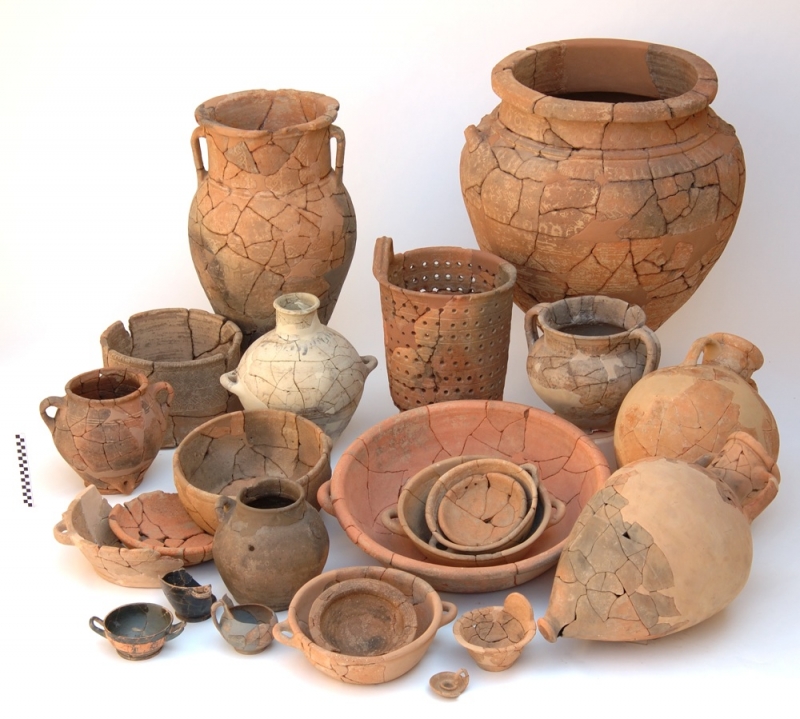 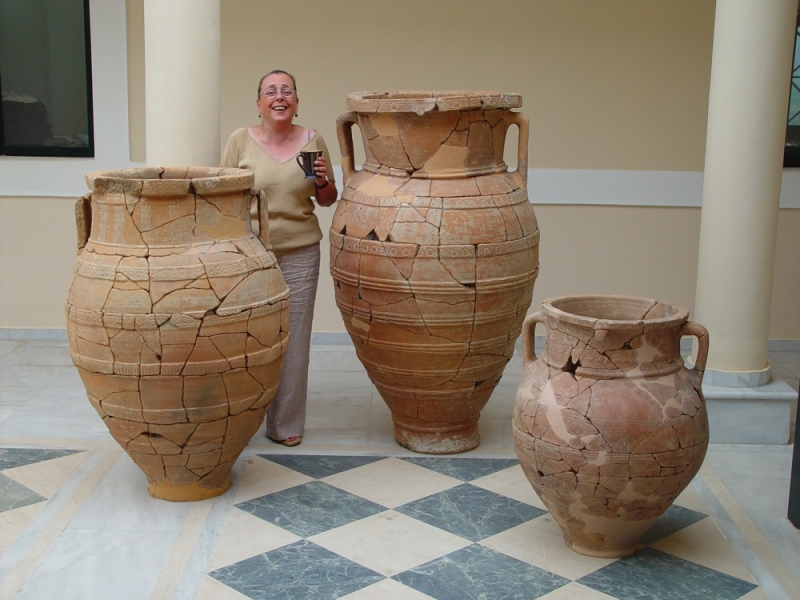 For instance, his team found evidence for large-scale storage of food and processing of grains and pulses at Azoria. However, they found no evidence for “primary” food storage and processing, which must have been conducted away from the city center, on rural estates or in distant dependent households. “At the center, they were preparing meals,” he says, “reducing pulses and grains for coarse breads, stews, and porridges.” This is a stark contrast from the preceding period, during which grain was regularly stored, cleaned, and ground to make flour in private households. 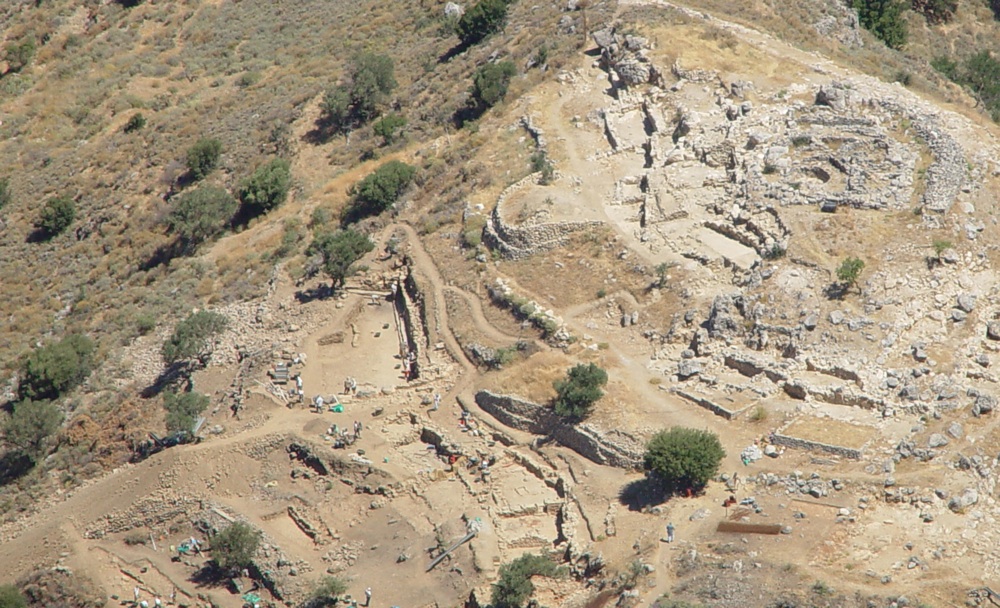 Also, as Haggis suspected, the archaeologists discovered that food was consumed in both private homes and public spaces at Azoria. The elite private homes were tightly compressed into “spine walls”—rather than grouped and widely distributed as in earlier periods—providing evidence for urban development and city planning. These houses had large storage and living areas, distinctly separate kitchens, and dining areas, all linked by a courtyard. Such households likely served as the centers of large estates employing serfs, slaves, and “quasi-citizens.” (Only houses of the elite have been excavated to date. In the coming seasons, he hopes to investigate all levels of Azoria’s sociopolitical society.)

The public structures included banquet halls and a type of monumental civic building known as an andrion, where important male community members assembled. In these areas, the team found food debris, cups, jugs, storage jars, and cooking pots, along with large conical stands for wine-mixing bowls. Haggis believes that one building’s function centered on wine mixing and drinking in huge quantities; it was also a place where cuts of meat were dressed with sprigs of thyme and mint, and prepared for roasting on a spit. Porridges and stews, with and without meat, were also consumed in these areas. 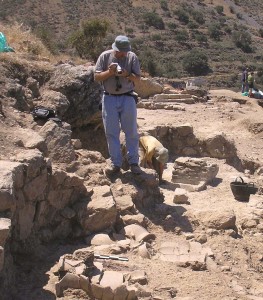 Haggis in the Archaic shrine

One main public dining hall, which included pantries for drinking vessels, featured an area for cult activity. Here, Haggis believes, sacrifices to Hestia, goddess of the hearth, were made at a small altar with votive offerings such as figurines, trumpet shells, murexes, and boars’ tusks, as well as food and drink. “Food consumption at Azoria in the public or civic buildings was a highly ritualized and ritual social event,” says Haggis. We imagine that both sacrifices to the gods were conducted on altars in these buildings, that matters of warfare and state were discussed, and perhaps even laws and concerns of the economy.”

A standout discovery at Azoria is a unique post–Bronze Age olive oil press. “The production of olive oil was a scaled-up, highly centralized, and state-controlled enterprise, probably for the consumption of within the civic buildings,” says Haggis. Olive oil was mainly used for food preparation, lighting, and special adornment and cleansing. “It was a semi-luxury product in Classical Greece, and its uses would have indicated the character and formality of an activity, as well as the participants’ status and social and political identity,” he says. “The installation at Azoria preserves evidence for all stages of oil processing—crushing, pressing, settling, and separation—providing the only well-preserved example of a lever-and-weights-style press from the Archaic Greek Aegean.” 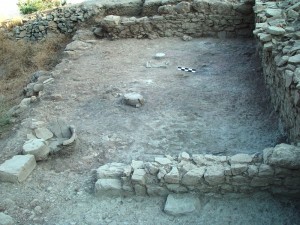 Azoria was abandoned, looted, and then set ablaze between about 480 and 475 B.C. Haggis’s team has uncovered evidence of the fiery destruction, which was probably caused by a neighboring city-state, on the buildings’ walls—each room deliberately torched from the floor up. In 2004, they recovered two complete serving vessels from the site’s “Monumental Civic Building.” Analysis of their contents has revealed one of the “last suppers” served before Azoria’s demise: one pot contained a sheep- or goat-meat stew with chickpeas, grapes, onion-like bulbs, and twigs from the mint family (possibly thyme and oregano); the other contained a stew of wheat, broad beans, and grapes.

The Archaic period on Crete was long believed to be a “second Dark Ages” (the Iron Age, which directly proceeded this period, is considered the “first”). Haggis, however, has seen the light. “The dramatically historicized—or perhaps historically dramatized—‘Archaic gap’ or ‘second Dark Ages’ is an illusion of the archaeological record… We know that the sites exist, we simply have to excavate and study them,” he insists. “That said, the sixth century B.C. does represent a period of change, a discontinuity from the Early Iron Age and Early Archaic settlement and burial patterns and structures. I think that work at Azoria demonstrates quite clearly that the discontinuity is related to the development of cities, and thus new ways of structuring the economy, social and political organization, and the way of life on Crete.”